It’s amazing how easy it is to let life steal my voice. A few weeks ago I had a major breakthrough only to hit a wall. 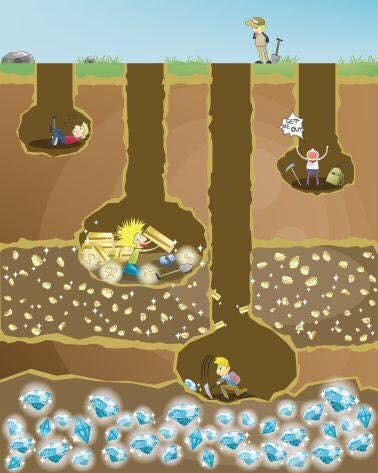 So many times I feel like the crazy person in the middle of this illustration…spinning my wheels, exerting a lot of effort, not getting anywhere. Other times I feel like the dude on the upper right, utterly frustrated. The past few weeks I’ve been snoozing on who I am. Why? Because I’m actually the guy on the bottom…on the cusp of everything I desire.

I’m learning a new skill. EFT. Emotional Freedom Technique. I’m still such a novice that I’ve only done it once. Months ago. The results were so powerful I got scared an haven’t tried it since.

You see…freedom sounds great while you’re in captivity. But…you get comfortable in your discomfort. That’s why long-term prisoners have such a high re-incarceration rate. It’s not because they love the prison life or haven’t made life changes. It’s because prison is all they know…it’s part of their identity.

Where I am emotionally, financially and spiritually is all I know. The thought of the freedom with just a couple more pushes…or taps as the case may be…sounds amazing…but it scares me so much thinking about it makes me nauseous.

This morning, though, as I was meditating, I had a visual come to me. I see a mountain in front of me…which seems and feels daunting. That mountain isn’t made of rock…it’s made of canvas on a flimsy stand. One good push and I’m onto what I deeply desire.

Writing this pokes a hole in the canvas. Tonight…I do the hard work.

Once I get this figured out…that thing I’ve been promising will happen suddenly. Make sure you’re following along for the announcement!

3 thoughts on “The illusion seems so real”